72 Virgins
Countdown to a Terror Attack on US Soil 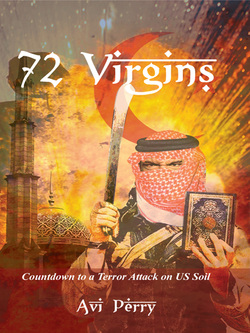 A suspenseful and intriguing read from start to finish

Masterly plotted, thrilling, captivating, replete with stealth, and above all, enlightening

72 Virgins is a thriller about Jihad terrorism and the security agencies’ struggle to thwart its stratagem and trounce the perpetrators. Abu Musa is an Islamic Terrorist with an agenda, a ticking bomb inside the US. Arik Golan is an Israeli who tries to bring him down and pull the plug on his terror organization. Stanley Kramer is an FBI agent on a hunting mission, seeking to place both Abu Musa and Arik within his cross-hair. The FBI, the Israeli Foreign Intelligence Service—the Mossad, the US-based Iranian clandestine terror network, and the Islamic Jihad fraternity are engaged in a timeless conflict, playing out to a crescendo that comes to a head before the dramatic conclusion.

The book draws on current world events, politics, cultural divisions, international intrigue and religious fanaticism. It is masterly plotted, thrilling, captivating, replete with stealth, and above all, enlightening.

The story offers an ample dose of realism, a cast of intense characters who engage in love, lust, and violence. It portrays the Jihad culture with its rationale and the volcano that breeds an irrational obsession with death. Moreover, it builds on the Jihadists’ motivation for targeting so many innocents and exploiting the victims’ massacre as a stepping-stone to their dream of eternal paradise next to Allah’s throne.

The real question is not whether Jihad terrorists’ plots will ever cease to emerge – there is no chance of that. The question the book seeks to answer is—will the next one be stopped before it’s too late?

72 Virgins is built on the author’s life experiences that combine technology know-how, familiarity with spy craft and Human Intelligence (HUMINT), understanding of Middle Eastern cultures and history, a great sense of humor, and a talent for writing—all breathe authenticity into the setting.

Although 72 Virgins is a suspense-thriller, focusing on a countdown to a terror attack on US soil, it is, nevertheless, highly instructive. The story and its associated subplots are fiction, but the setting is real, the places where conspiracy is instigated are fictional, even though they're based on genuine events; the characters are deep and distinctive, while at the same time, they embody their unmistakable cultural heritage. Ronald L. Donaghe, Winner of the 2008 Jim Duggins out-standing Mid-Career Novelist Award., characterized it best—"Perry's style and approach, makes for a great, entertaining read, in addition to being suspenseful and intriguing, from start to finish."
Gradient Publishing